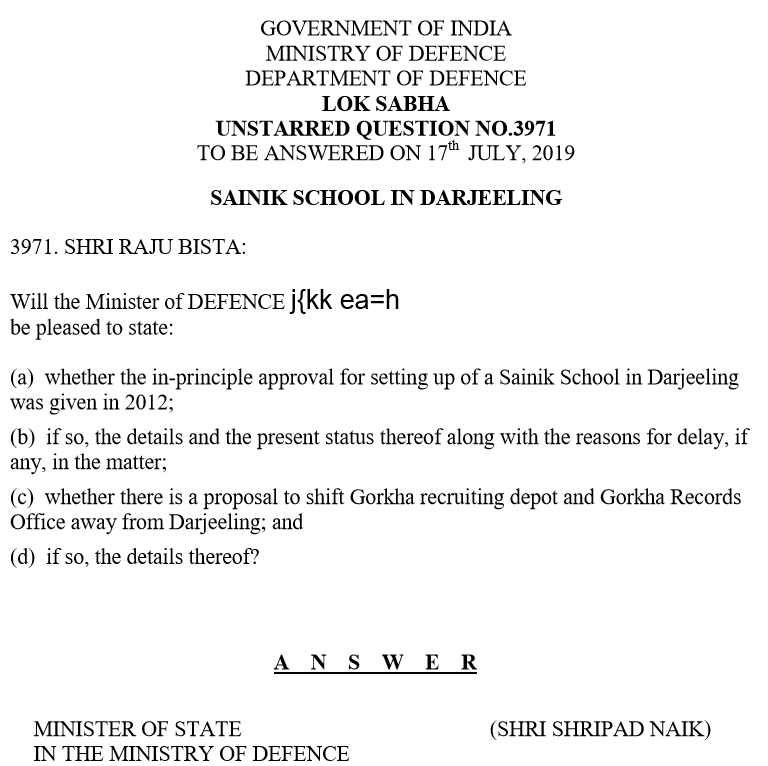 This parliamentary session, MP Raju Bista ji has tried his best to understand the status of various demands placed before the government by our previous representatives. The best way to do so is to ask questions in Parliament. 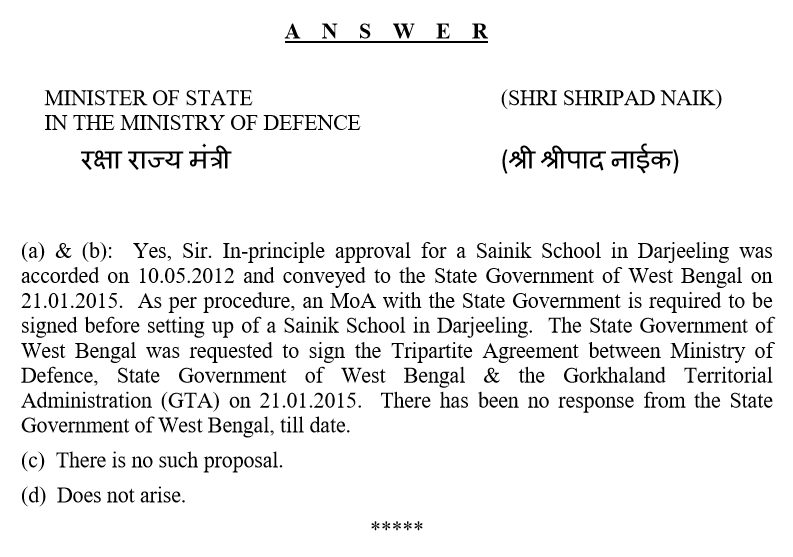 The MP was informed that approval for Sainik School in Darjeeling was given in 2012 itself, yet no school has been built till date. He was also very concerned with the widespread outrage following the rumour of GRD being shifted out from Darjeeling,

He had asked the Ministry of Defence the following questions [Question number 3971]:

“Will the Minister of DEFENCE be pleased to state:

(a) Whether the in-principle approval for setting up of a Sainik School in Darjeeling was given in 2012;

(b) If so, the details and the present status thereof along with the reasons for delay, if any, in the matter;

(c) Whether there is a proposal to shift Gorkha Recruiting Depot and Gorkha Records Office away from Darjeeling; and

Here is the answer, he received today from the Ministry of Defence

(c) There is no such proposal.

Clarifying on the shifting of GRD and GRO, the Defense Ministry has responded, “there are no such proposals.”

The answer from the Ministry, concerning Sainik School shows that despite approvals from the Defence Ministry, the Government of West Bengal has NOT SIGNED the Memorandum of Understanding since May 21st, 2015.

In fact, they haven’t even bothered to respond to the request for a tripartite agreement in this regard to be signed between the Union Defence Ministry, Govt of West Bengal and the Gorkhaland Territorial Administration.

Sainik Schools act as feeder institutions for National Defence Academy, Indian Military Academy, and Officers Training Academy. In denying the hill youths an opportunity to study in such a premier school, the West Bengal government is attempting to deny them a safe and secure future and denying our nation future brave officers.

I appeal to the West Bengal government to stop becoming an impediment towards the bright future of our youths and request them to take fulfil necessary obligations to that a Sainik School can be built in Darjeeling hills.