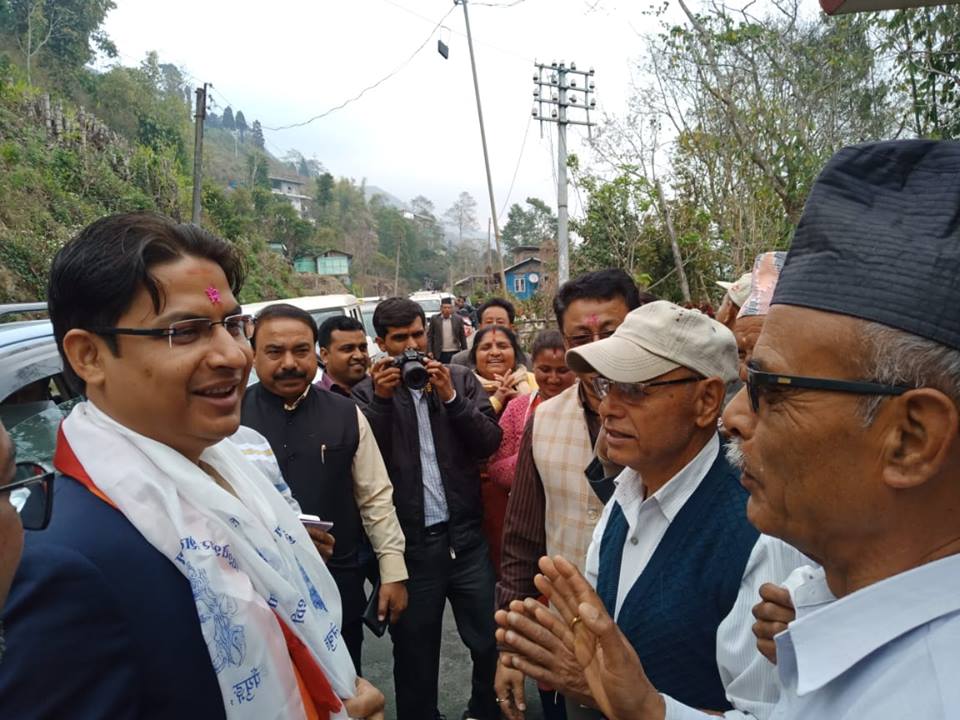 From his humble beginning as the son of a village school teacher in Manipur to becoming the Managing Director of 5000-crore company, and now representing Darjeeling constituency as MP, Raju Bista’s journey has been a story of hard work, perseverance, and unwavering dedication.

Raju Bista was born in 1986 to a Gorkha family, Smt. Parvati Bista and Shri Vishnu Bista from Manipur.

A disciplined RSS worker since childhood, Raju Bista is known for his organization skills and leading various social projects. His childhood friends still fondly recall the village-level cricket and football tournaments Raju used to organize over the weekends. As a dutiful son, everyone saw his helping his mother in running a vegetable shop in the village at a very young age.

Raju Bista joined the Surya Foundation in 1999, where he received training and was mentored by prominent social and business leaders. Impressed by his organizing skills and ability to engage youth, Shri Jaiprakash Narayan, the Chairman of Surya Foundation entrusted him to run Surya Foundation’s Ideal village Project (Aadarsh Gaon Yojana) in North East region of India particularly in Manipur, Nagaland, Tripura, Arunachal Pradesh, Sikkim and Darjeeling. As part of the project, Raju travelled extensively in the NorthEast region to understand local issues and creating long-term plans for sustainable development at the grassroots.

Later, he led various social initiatives across India including Youth Development Camps, School Bharti Organization, International Naturopathy Organization, Having experienced the hardship and the huge gap in opportunities between Rural and Urban areas in India, most of his social initiatives are targeted to rural students, youths, and communities.

As part of his youth development initiative, Raju organized 15-days Personality Development Camps (PDCs) across India, for young boys and girls to motivate and put the right impression and channelize their energy into positive social involvement. His PDCs focus on four main aspects – mental, intellectual, physical, and spiritual development. Besides, he also led the School Bharti Organization, a platform to connect with academic communities across the country, understand their issues and provide assistance to excel in their respective fields.

Raju is also passionate about promoting Yoga and Naturopathy and regularly organize workshops, seminars, conferences, and health camps on Naturopathy and Yoga. He is also an active member at the International Naturopathy Organization (INO), a global platform for overall development and promotion of Yoga & Naturopathy internationally. Raju Bista also worked closely with PM Narendra Modi’s team for promoting “International Yoga Day” and was instrumental in bringing thousands of participants from over 24 states to New Delhi for the historic event.

Raju Bista is an active member of a national think-tank constituted by Surya Foundation, comprising domain experts on several issues of national importance. The think-tank organizes discussions, seminars, and brainstorming sessions on various national issues relating to Defense, Economy, External Affairs, Indian Railways, Internal Security, Tourism, Power, Water Security, Education, Judicial Reforms, Agriculture, and Rural Development.
The think tank shares its discussions and formulate recommendations for the government to implement. Many recommendations made by the think-tank have already been acknowledged and successfully implemented by the government.

Raju’s association with Surya Foundation in his initial formative years made him travel across the length and breadth of the country, where he worked closely with volunteers, community members, and youth.

Raju Bista's journey is an example of possibilities proving the point that even a boy from a remote area of our country can become Managing director of one of the biggest MNCs of the country. He is an inspiration to thousands across the country who believe that they can make it ‘Big’ and inspires to work hard with honesty and dedication.