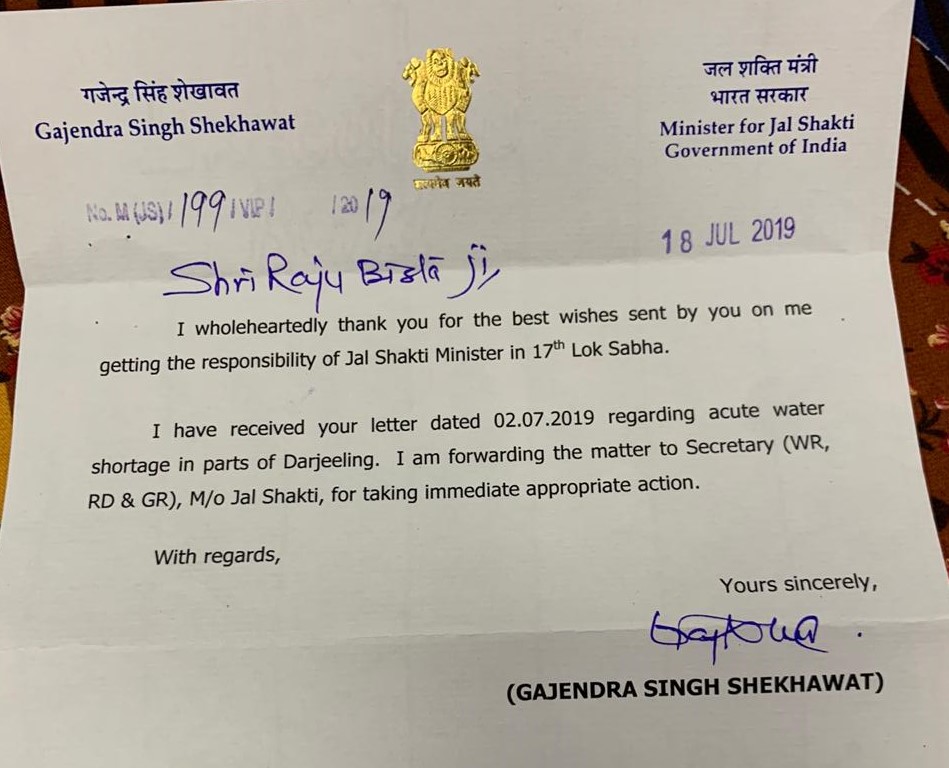 On July 2 2019, Darjeeling MP Raju Bista had written to the Union Minister for Jal Shakti Shri Gajendra Singh Shekhawat ji. Congratulating the Hon’ble Minister from the people of Darjeeling LS constituency MP Bista had said, “On behalf of the people of Darjeeling Lok Sabha constituency, I congratulate you on your consecutive win to the Lok Sabha, and also for assuming the office of Jal Shakti Minister.” MP Bista had then gone onto highlighted the following issues:

In this regard, the MP had requested the Hon’ble Minister to:

Explaining the demand for a comprehensive water management plan, MP Bista said, “The Darjeeling and Kalimpong districts receive one of the highest rainfalls in India, yet there is an acute shortage of drinking water here. This is because of the lack of proper planning and infrastructure relating to water collection and supply in the region. The time for “random acts of development” – one well here, one water project there, one reservoir here, another there is long past. We need a holistic landscape-level water management plan to be developed so that we can all work towards achieving water sustainability with the same plan and goals in mind.”

Speaking on the demand for the beautification of Riven Mahananda MP Bista said, “River Mahananda is to Siliguri, what Maa Ganga is to Varanasi. This river flows through the heart of Siliguri and people from all walks of life have strong connections to the river – from conducting Chhat Puja to immersing Maa Durga idols after Dashami – River Mahananda is an important cultural fabric of Siliguri city. However, utter neglect of this river during the CPIM and TMC rule has resulted in this once mighty river, to turn into a dirty sludge-filled water body in many parts. I have a vision of seeing Mahananda as the pride of Siliguri, a beautiful tourist attraction that will be seen as an example for other places with rivers in the country, and together we can achieve it.” 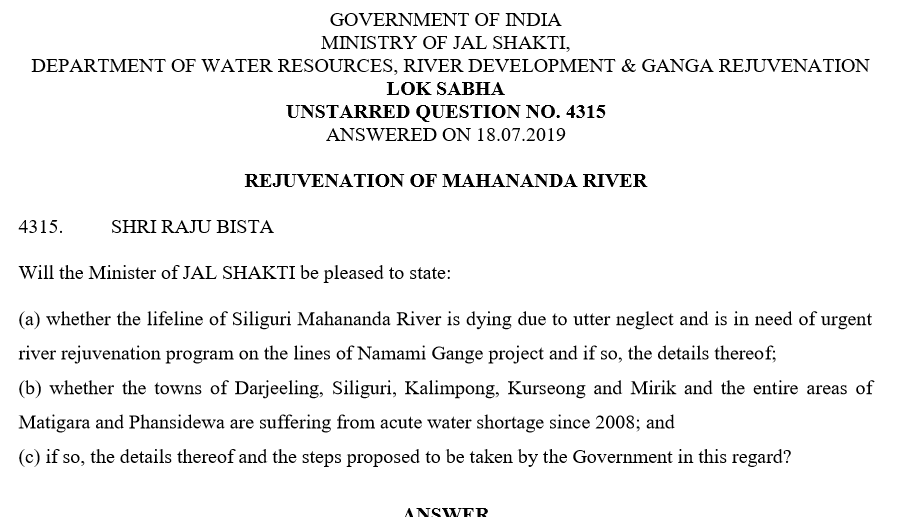 Regarding the drip irrigation, MP Bista said, ‘Darjeeling is known the world over for its tea, however, along with tea our region also produces Oranges, Cardamom, Ginger, Maize, Potato, Pineapple, Flowers and various other agricultural produce. However, acute shortage of water in the districts of Darjeeling and Kalimpong has left the farmers here very dependent on the monsoon rain, which has over the years, become highly unpredictable and causing the farmers to reel under grave economic loss. So the introduction of drip irrigation system of farming is of vital importance for water sustainability in the region.’

Acknowledging the wishes sent by the MP, the Union Minister of Jal Shakti Shri Gajendra Singh Shekhawat ji thanked him for the letter. The Hon’ble Minister also stated that the matter has been forwarded to the Secretary (WR, RD & GR) to taking immediate and appropriate actions.