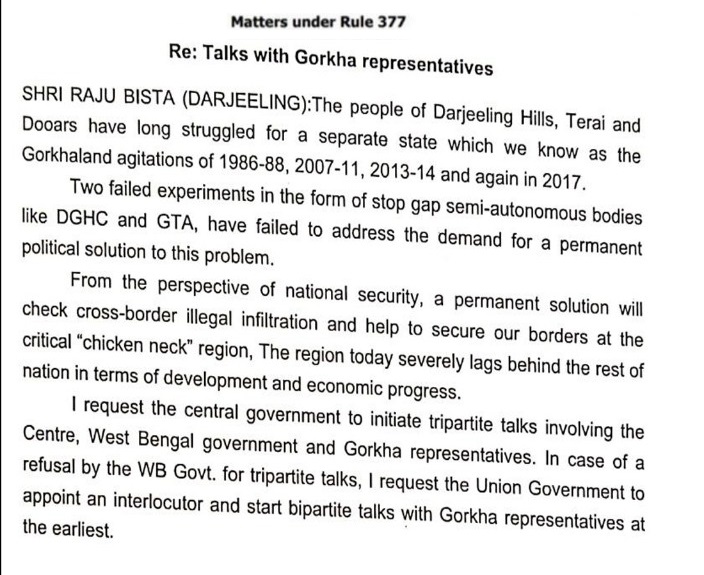 On the 25th of July Darjeeling MP Raju Bista drew the attention of the Parliament to the urgent need to find a Permanent Political Solution to long pending demands of the people from our region. He had raised this issue under Rule 377 of the Parliament.

To those who are unaware, Rule 377 of the Rules of Procedure and Conduct of Business in Lok Sabha permits the member to raise a matter under Special Mention. Permission for the same has to be sought two weeks in advance, and no matter can be raised unless the Speaker has given her/his consent thereto and the approved text would go on record.

Under this rule, the necessary extracts, endorsed by the Ministry of Parliamentary Affairs is forwarded to the concerned departments. The concerned Ministry/Department are then required to send replies to the concerned MP as expeditiously as possible, preferably within a month, under the signature of their Minister/Minister of State.

Here is the official text of the matter he had raised,

Re: Talks with Gorkha Representatives

Two failed experiments in the form of stop-gap semi-autonomous bodies like DGHC and GTA, have failed to address the demand for a permanent political solution to this problem.

From the perspective of national security, a permanent solution will check cross-border illegal infiltration and help to secure our borders at the critical ‘chicken-neck’ region, the region today severely lags behind the rest of nation in terms of development and economic progress.

MP Bista was supposed to read out this text on the floor of the house on the 25th of July, but due to Triple Talaq Bill taking up the allocated time of the house, all the members whose matters of Special Mentions were scheduled for the day were asked to submit the papers officially, instead of reading them out.

Reacting to comments (as appeared in local media outlets) made by certain individuals with zero political standing questioning MP Bista raising the Permanent Political Solution issue during the Zero Hour of the Parliament on July 29th, 2019, he said, “People who did not even win from their own booth are today questioning the sanctity of the Parliamentary procedure, in doing so this individual is undermining the due seriousness of the Parliamentary processes and its significance. For some unelectable politicians, ignorance is indeed a bliss.”

Zero Hour refers to that period in the Parliament when matters of urgent public importance are taken up. The issues raised in Zero Hour are sent to the Ministry/Department concerned for further action.

Talking about him raising Permanent Political Solution issue under both Rule 377 and Zero Hour, MP Bista said “Finding a permanent political solution to the long pending demands of the people here is a priority for me, and our party BJP. This is why I went and met with the Hon’ble Governor and requested him to call for a tripartite meeting to begin developing a roadmap towards this, in my very first visit to the constituency after the election results were declared. I have already met with Home Minister Amit Shah ji regarding the same a few days ago. For me, this issue is as personal as for rest of my constituents. Individuals have every right to question me, but I request failed politicians not to use this issue to bake their political bread.”

Recalling his election speeches, MP Bista said, “I had said repeatedly during my election rallies that I will never let the head of my community hang in shame, I want to reiterate, I meant it that day as I mean it today. I am not here to do politics, I was sent here by Narendra Modi ji and Amit Shah ji to serve the people from our region, and I will do so to the best of my abilities.”

“I request for help and support from all quarters to help arrive at the Permanent Political Solution. Let us work together to make it happen. Those currently occupying the GTA posts in nominated capacity can help towards the cause by resigning from their posts and joining my call for dissolving GTA, as GTA is the first hurdle towards a Permanent Political Solution – it needs to be dissolved, and those making noise can help make it happen by resigning and showing their sincerity towards the people” added MP Bista.